We’ve received many very helpful observations which have enabled us to establish some kind of direction for our research. For example: the harp is widely used as an emblem of Ireland. However, there is no ‘W’ in the Gaelic alphabet. In reinforcement of this, in medieval times and out of respect to St Patrick, it is suggested that no Gaelic Irish child would be named ‘Patrick’. Unless it belonged to a Gaelic person using an anglicised version of their name then these factors dramatically reduce the number of Irish candidates for ownership of The Druidstone Ring.

General consensus is that, should it be advantageous to attribute a country to the harp engraved on The Druidstone Ring, then the harp has the features of a Welsh, rather than Irish or Scottish, harp. Having said that, it is not to rule out the inclusion of the harp to indicate Ireland (or, albeit less probably, Scotland). Few of the early representations of harps used for Ireland prior to the accession of Scotland’s James VI to the English throne actually look much like ‘Irish’ harps. It was only after James ascended the English throne, taking many Scots down south with him who knew what the Gaelic ‘clarsach‘ was supposed to look like that the images used begin to reflect the wire-strung harp of Ireland and Scotland. (At least for a period before the designers started turning the instruments’ fore pillar into a variety of nubile female forms.) 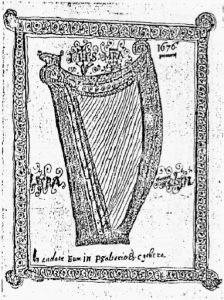 Alongside is an illustration by Gwilym Pugh, dated 1676. Pugh was a noted historian of the Welsh harp; his drawing is one of the very few representations of Welsh harps before the eighteenth century (when images of the classic Welsh triple harp begin to emerge). Assuming that the evolution of the harp between the fifteenth and seventeenth centuries was modest, the shape of the instrument as drawn in 1676 is what could reasonably be expected of a Welsh harp at the time The Druidstone Ring was created. Perhaps the most distinctive similarity between the drawing and The Druidstone Ring is the notably flat bottom of the instrument.

In the fifteenth century the laws of Wales (Leges Wallicae) were only just beginning to emerge, but it is evident that a harp was one of the three things that were necessary to constitute a gentleman, or a freeman; and that “none could pretend to that character who had not one of these favourite instruments, or could not play upon it”. To prevent slaves from pretending to be gentlemen, it was expressly forbidden to teach, or to permit, slaves to play upon the harp; and only the king, the king’s musicians, and gentlemen, were allowed to have harps in their possession. A gentleman’s harp could not be seized to repay a debt because its absence would potentially reduce him to the level of a slave. So having a harp on your seal may well have been a way of making clear that you were an individual of substance.

The flower on the bezel (front), together with its stem and leaves, seems a little dominant to be regarded as mere ‘decoration’; could they indicate some sort of dynastic or political allegiance?

Potentially, though not necessarily, eliminating any regal possibilities of ownership are the facts that The Druidstone Ring was made using a lesser material than gold and that there is no regal ensignia (which would generally be thought of as a crown) on the ring. The observation has been made that fifteenth century Wales was a place where thieving was rife. It would be courting trouble to routinely carry valuable items when travelling, giving thieves an expectation that you were an easy and profitable target; better to consistently travel without your valuables, carrying cheaper less-valuable copies instead? If you did need to travel around the country perhaps take your ‘reserve’ seal?

Similarly, but again not conclusively, governmental possibilities of ownership are questionable due to the fact that the ring doesn’t have any governmental ensignia – a shield would be an obvious metaphor for government.

Before the 1536 Act of Union, the Welsh did not generally employ surnames, but instead epithets, patronyms and (much less often) matronyms were used to identify people. Any of these approaches will almost certainly require more explanation on a signet ring that mere initials. Which might suggest that, if The Druidstone Ring was owned by a Welsh person, the period we should be considering is later than the ring’s estimated date of around the late-fifteenth/early-sixteenth century.

However, somewhat in contradiction the style of the lettering has attracted comment – the letterforms seemingly suggesting no later than the early sixteenth century.

So, lots of nuanced influences and factors, pulling the reader in a whole range of directions. But before being swallowed in the confusion let’s look at perhaps the most obvious factor, right in front of our eyes. 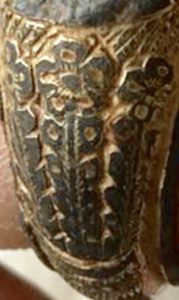 Look at any number of signet rings from the medieval period and you’ll see that the overwhelming majority have plain, undecorated, shoulders. For its purpose of impressing the ring on wax seals only the bezel (front face) of a ring would require any engraving. Extraordinarily unusually, The Druidstone Ring has elaborately embellished shoulders. This shoulder decoration serves no practical purpose whatsoever. It can only be present for reasons of prestige, to reflect the importance of the owner. On this basis alone it seems entirely reasonable to make the assumption that at the end of our quest we will have identified an individual of national significance.

All these ifs and buts and what-ifs. Let’s cut to the chase – in terms of identifying ‘PW’ we’ve got some strong contenders!

But what if it isn’t ‘PW’? Look closely at the image above – on the right, might it not be a ‘W’, but instead be two letters – ‘u’ and ‘r’? Might it spell the word ‘Pur’? The National Museum of Wales has changed its mind and ‘Pur’ is now what is thought to be engraved. In the medieval bardic tradition of adopting a pseudonym, then the Welsh word ‘pur’ is a word which when translated into English reflects all the values to be expected of a bard – pure, true, genuine, faithful. So, was there a medieval bard who was known simply as ‘Pur’?

Having accepted the change of the ‘W’ to ‘ur’ then perhaps we should look again at the ‘P’: is what appears to be a gap at the top of the letter ‘P’ really a gap? If so, why would the engraver leave a gap? Which raises the question: is it actually a ‘P’ at all?