Ifor Hael had of course long left Gwernyclepa to meet his Maker before The Druidstone Ring was crafted; nevertheless, as the llys of Gwernyclepa passed into the hands of successive generations of his descendants no doubt his familial spirit of generosity lived on.

We’ve looked at Ifor’s family tree and have identified 27 descendants who are recorded as having remained in the general area (ie, less than 20 miles away); these nobles may easily have been associated by history with a grander estate whilst also owning, and still using, Gwernyclepa. Here they are:

The candidates, with their relationship to Ivor noted, together with whatever other details are known, are listed here:

So that’s where we end up when we work forwards in time. With a lot of names. So now let’s try working backwards.

In which case we have a path of ownership of Gwernyclepa from renowned bardic-tradition supporting Ivor Hael to, at around the time that The Druidstone Ring was created, a fourth-generation descendant – Philip Morgan.

For a moment, let’s stand in Philip Morgan’s shoes at Gwernyclepa.

It’s just four generations since Ivor Hael (Ivor ap Llewelyn) was generously extending every hospitality to the bardic community. But sadly the Llewelyn dynasty has fallen into straightened times – within two more generations the llys, the family home for over four centuries – will have been sold. Whilst the family culture of bardic support remains, unfortunately the family coffers are dramatically reduced – so much so that the annual custom of offering a gold ring to the ‘Bard of the house’ can no longer be afforded. How can the custom be maintained and the family reputation and honour upheld? Instead of a ring of gold, surely in the circumstances it’s acceptable to offer a ring of gold gilt. It is logical and it does make sense…

It seems that in Philip Morgan we may have identified the bardic-supporting patron who gifted The Druidstone Ring! 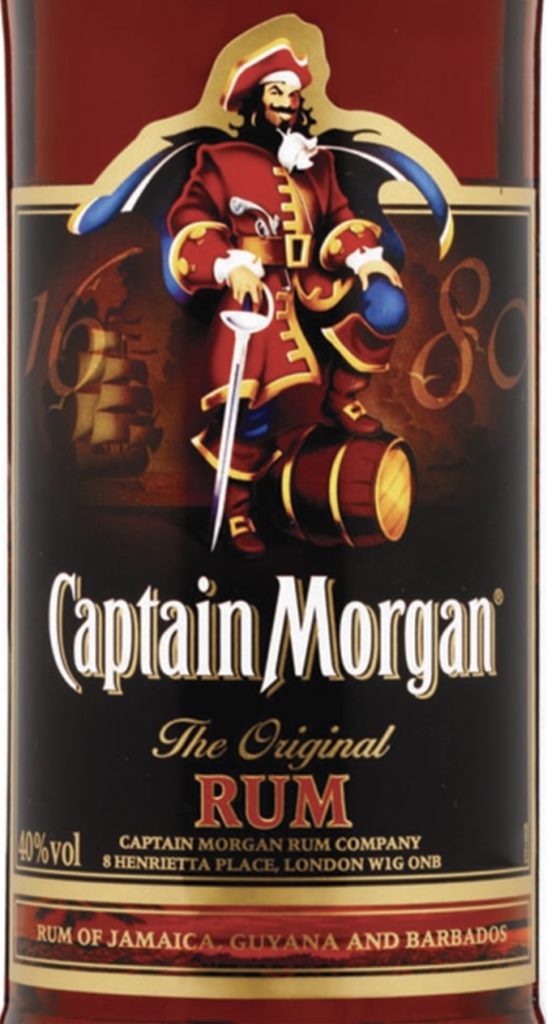 Historical footnote of major interest: Philip Morgan married an Ann Morgan (who came from the nearby area of Machen so they were probably already related; that’s the way it was in those days!). Ann was the sister of Captain Sir Henry Morgan, Governor of Jamaica. You’ve seen Henry many times before – you know him better as the actual pirate name and face of Captain Morgan Rum! Small world! History comes alive!

To be clear, the proposition is that the individual who offered the gift of The Druidstone Ring was not only a bardic-supporting patron; he was also Captain Morgan’s brother-in-law!

A generation or two later (the year of 1632 is widely suggested), ownership of Gwernyclepa moved from one branch of the Morgan family to another – the renowned Morgan family of Tredegar. The Morgans of Tredegar were well aware of the importance of their illustrious forbear, and for many years an avenue of trees led from the family seat of the nearby Tredegar House to the old llys at Gwernyclepa, which became not so much a physical place (by the seventeenth century it was falling into serious decay) but more a spiritual place for the Morgans. ‘Ifor Hael’, for the Morgan family, became more than just a man and distant ancestor; he became an ideal to aspire to. His name was evoked many times in the history of the Morgans: Sir John ap Morgan made the halls of Tredegar House ring with song with his employment of Welsh bards, as did the Elizabethan adventurer Miles Morgan; we can see strains of Ifor’s princely hospitality in the socialising of Sir William Morgan in the early eighteenth century, and the lavish praise Ifor received found a mirror in the praise poured on Sir Charles Morgan in the nineteenth century (“One of the kings of south Wales”). Ifor’s name was frequently used by the Morgans in political campaigns. Who would dare to oppose a descendant of Ifor Hael in south Wales? Had the electors not read their Dafydd ap Gwilym?

Perhaps the closest the Morgans ever reached to the heady adulation and reputation enjoyed by Ifor came in the late Victorian era, when the war hero and generous public benefactor Godfrey Morgan, 1st Viscount Tredegar, was acclaimed in the area as ‘Ifor Hael the Second’. High praise indeed. 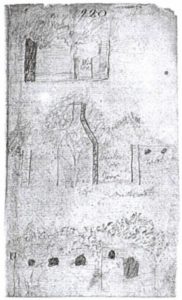 Drawings by the bard Iolo Morgannwg when he visited Gwernyclepa in the late eighteenth century.

Although Ifor’s reputation remained undiminished across the centuries, sadly the same was not to be the fate of the old court of Gwernyclepa. The eighteenth century bard Evan Evans (1731-1788) who went by the name Ieuan Brydydd Hir visited it, and wrote:

“Ifor Hael’s court, wretched sight, lies destroyed
Just heaps of stones in the trees
Where the thorns and brambles grow
In the place where majesty flourished” 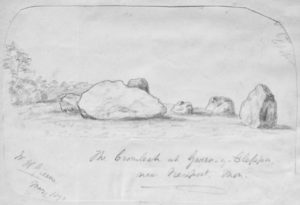 An illustration of the cromlech, drawn by William Henry Greene on 12 May, 1893.

There is very little to see now at Gwernyclepa, just the ancient ‘cromlech’ (standing stones) – which presumably were the reason why this site for the llys was chosen in the first place – remain. Even the name has changed, having evolved – over the more than half millenium which has passed – into ‘Gwern-y-Cleppa’. The site of the llys itself has not been built on but, in the words of afore-mentioned Ieuan Brydydd Hir: “The ancient paths where there was once song are now the haunts of owls.”

However, the spirit of Ivor Hael lived on. Named after Ifor Hael, in the early part of the nineteenth century the ‘Order of True Ivorites’ was founded by Thomas Robert Jones (1802-1856). The society’s motto was ‘Cyfeillgarwch, Cariad a Gwirionedd’ (Friendship, Love and Truth); it was the only friendly society which conducted its business exclusively in Welsh. As well as helping the poor and needy, the order furthered the Welsh language through organising local Eisteddfodau – evidently a feature of the court of Ifor Hael. 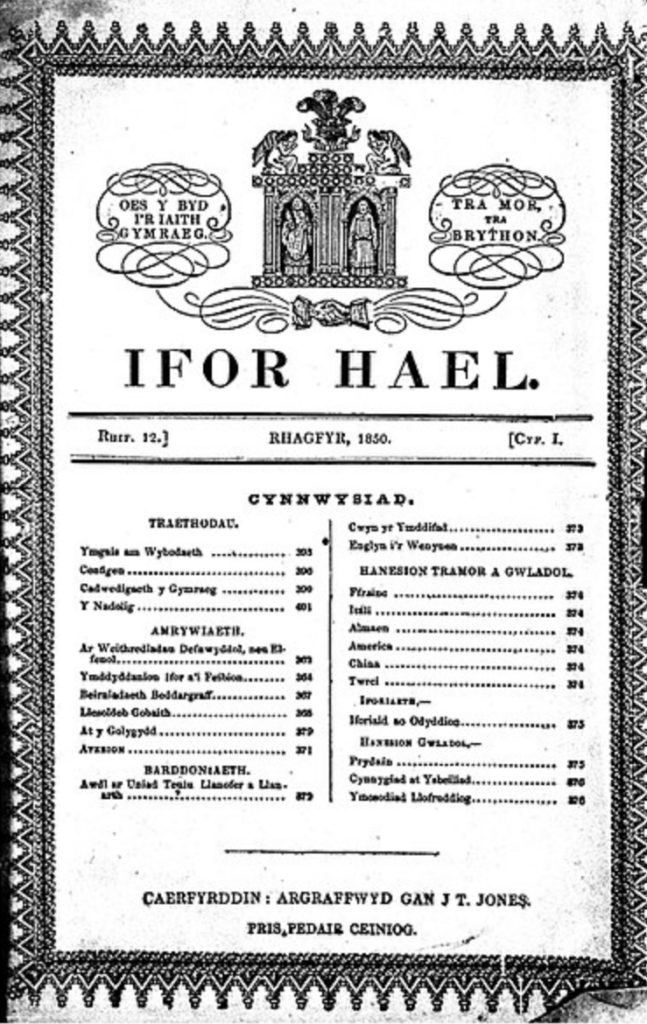 The ‘Laws and Regulations of the Order’, published in 1839, state that the True Ivorites Society is an institution ‘to encourage the Welsh language, to preserve its members as far as possible from want’. The laws also stated (in Welsh, of course) that ‘all books and accounts belonging to this Society be kept in the Welsh Language’. Reflecting the competition from other societies and the dramatic reduction in the number of Welsh speakers in the area caused by the Industrial Revolution during the second half of the nineteenth century, these laws were amended in 1858, when the ruling regarding the usage of Welsh stating that the secretaries of the lodges should be competent in record-keeping in both Welsh and English.

The Ivorites, along with fellow friendly society the Oddfellows, were especially strong in Glamorgan, and survived well into the twentieth century. The societies were often a substitute for trade unions, but were never a threat to the unions’ existance; unions tended to grow out of the activities of the friendly societies.

Although not a ‘secret society’ by a strict interpretation, the Ivorites nevertheless had their own handsigns and handshakes which were published in a booklet. If not secret, then extremely exclusive…