skip to Main Content
But of course you’re now thinking
the same as everyone else is thinking:
Who was ‘PW’? What was ‘Pur’? 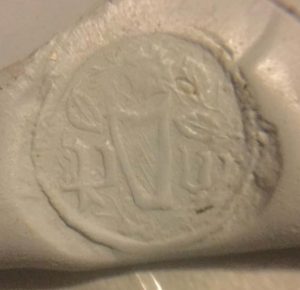 Let’s first of all be sure we’re basing our research on the correct pair of initials. Alongside is an image showing an impression made from The Druidstone Ring. Initially, it was thought indisputable that the initials are a ‘P’ – although the ‘P’ doesn’t quite join at the top of the loop – and a ‘W’. Later thinking came up with an alternative – still a ‘P’ on the left but ‘ur’ on the right.

In our quest we’ve had help, advice and suggestions from myriad people. For professional reasons it may be inappropriate to attribute names to comments so we haven’t done so – but we have listed below individuals and organisations who have assisted us. If anyone who’s contributed would like to be more closely identified with a particular comment then, please, just let us know!

Well, as we set out on our quest to identify the owner of The Druidstone Ring what did we know?

Based on the National Museum of Wales’ appraisal we knew that The Druidstone Ring is a signet ring, or seal, made between – say – 1475 and 1525. We also knew that it’s made of copper alloy, rather than the gold of the similar Raglan Ring. That on its bezel (face) it features a harp, with the almost-equal visual presence of a flower, complete with stem and leaves. And that it has Tudor-esque flowers on its ‘shoulders’.

So of whom should we make enquiries. It seemed to us that a prerequisite of a source possibly being able to help us was that the source must have a relationship with the medieval period – or be able to suggest sources that had such a relationship. An obvious category were historians, particularly (because of the location of the find site) of south Wales but also (because of the potential Irish symbolism of the harp) students of Irish history. Similarly obvious were students of harp music and students of, as the National Museum of Wales put it, “the bardic tradition”. The suggestion that the letters could spell ‘Pur’ (the Welsh word for ‘pure’) simply oozes bardic connections! There were of course also individuals who had a specific interest in seals.

We googled what we considered relevant (although random!) words and followed any interesting links. After a couple of googling sessions we’d initiated communications with a dozen or so people. Some were easily located, others – perhaps PhD students who had many years ago written a thesis with even a tenuous relevance to The Druidstone Ring – were harder to track down. But eventually we were able to contact pretty much everyone we’ve identified as being possibly-useful sources.

Inevitably, some of those sources proved to be unproductive (although we must record that every single contact was disarmingly courteous!); however many people we contacted, who didn’t feel able to offer any practical assistance, were very willing and able to suggest other potential sources of assistance – whether they named individuals, societies, museums, online indices, websites, libraries… So much so that to date we have had purposeful exchanges with almost 50 people and assembled a list of a similar number of online and offline resources!

Further to the assistance we’ve been given this list comprises people and organisations (in an approximately alphabetical order) to whom, and to date, we extend our particular thanks and appreciation: