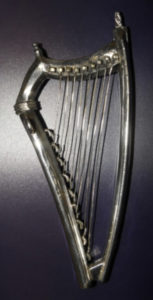 Two of the very first eisteddfodau were those held at Caerwys, in modern-day Flintshire, north Wales, in 1523 and 1567/8. The Druidstone Ring substantially pre-dates those assemblies – but their purpose has a relevance.

At that time, the purpose of these professionally organised quasi-national eisteddfodau was to separate the highly trained practitioners of the traditional bardic crafts from those unskilled vagrants and vagabonds who caused a nuisance travelling around the countryside in search of money for their claimed talents.

At each eisteddfod the authentic bards were graded and provided with a licence or degree allowing them to continue the practice of their crafts. The chancers were readily identified by the incredibly learned judges and summarily dismissed.

The original commission for the second eisteddfod granted under the authority of Elizabeth I still exists; the document states that: ‘William Mostyn Esquire and his ancestors had the gift and bestowing of the Silver Harp appertaining to the chief of the faculty’. Remarkably, the silver harp badge also still exists and is shown above. So it is clear that the awarding of physical prizes (stylised in recent centuries into, for example, the chair) was established from the very first eisteddfodau.