In their ‘History of the World’ series the British Museum offers this description of the Raglan Ring: “Perhaps the finest example of late medieval gold jewellery ever to be found in Wales, this massive gold ring, discovered in 1998 is likely to date from the middle or third quarter of the 15th century. The ring has a circular bezel engraved with a design of a lion on a bed of flowers, within a single cable border with the legend: ‘to yow feythfoull’ or ‘feythfoull to yow’ and the initials W A either side of the lion”. 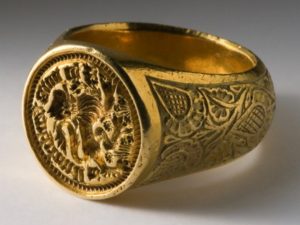 This ornate signet finger ring was found near Raglan, Monmouthshire, by a metal detectorist and was – because of its gold content – required to be declared ‘treasure’. The finder was then obliged to sell the ring to the British Museum, who in 1999 paid a very modest £30,000. The ring was then allocated to the National Museum of Wales, where it is currently in storage.

The shoulders of the ring are decorated with flowers and leaves and, particularly the way in which pointed flowers fill the corners of the panel (a similar cross-hatching approach was taken on The Druidstone Ring), make it significant in relation to the study of late medieval rings, with very close comparisons existing in the engraving on the gold episcopal ring of John Stanbury, Bishop of Hereford (1452-1474), a mid 15th century cross from Winteringham, Lincolnshire and a gold ring from Godstow Priory, Oxfordshire.

The original owner of the seal has yet to be identified, though the finding of the ring near Raglan and the initials ‘W A’ make William Herbert, first Earl of Pembroke (executed after the Battle of Banbury during the Wars of the Roses, in 1469) a possibility. William married Anne Devereux, so it’s easy to see how the initials might stand for William and Anne.

Although it may have been worn over a glove, the size of the ring nevertheless suggests that it was worn by a man. The use of the word ‘faithful’ in the inscription may be illuminating: Herbert was one of two men referred to as the ‘chosen and faithful‘ to the new king, Edward IV, and on Edward’s coronation William was ennobled. The inscription be interpreted as a sign of the owner’s faithfulness to his wife or to the crown (in which case identifying the ‘A’ as ‘Anne’ becomes less logical and less authoritative). The identification of the ring as that of William Herbert is by no means proven; in contradiction of the above hypothesis it would appear that William Herbert did not use a lion as his badge or the inscription as his motto. Other names are easily possible.

At present, all that can safely be said is that the ring was a mark of rank and probably belonged to an important officer or visitor to Raglan during the second half of the 15th century.

Whether the Raglan Ring was in fact a ring seal or, given its sentimental message, a less historically-significant love token or symbol is not yet clear. This is not a question posed by The Druidstone Ring, the use of which is in no doubt.

As ‘treasure’ the finder had no choice other than to sell the Raglan Ring to the national collection; there is no such obligation on The Druidstone Ring. The Druidstone Ring may therefore be regarded as the most valuable medieval signet ring seal permitted to remain in private ownership.