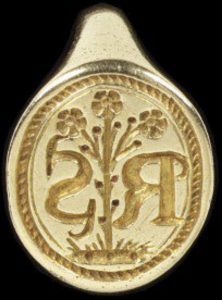 The pentafoil flowers on the shoulders of The Druidstone Ring are similar to flower heads on a late fifteenth-century ring in the Victoria and Albert Museum, shown alongside. Another similarity between the two rings are the ‘flanged’ borders to the hoop.

The support of a wealthy patron was crucial to the income of a bard. Generous patrons – who would offer gifts to the most excellent bards – were eagerly sought. It is easy to imagine how appropriate would be the giving by a patron to a bard of a ring seal inscribed ‘Pur’ (pure).

Alternatively, adopting a bardic name as a pseudonym was a tradition widely used in Wales and the other Celtic areas of Cornwall and Brittany. Should the harp be representative of the owner’s harp-playing excellence, then it would be encouragingly consistent that the harper in question might adopt, and feature on his seal, a pseudonym which alluded to the ‘purity’ of his skills – a quality which would have been much revered at the time.

In referencing the signet ring in the collection of the Victoria and Albert Museum, whilst on the one hand consistencies can be observed, on the other hand there is an obvious visual conflict between the soft and relatively sophisticated letter forms of the V&A example and the severe Black Letter letter forms of The Druidstone Ring. Judged on the flowers the two rings could be from similar periods; judged on the letter forms, the two rings do seem to belong to distinctly different ages.