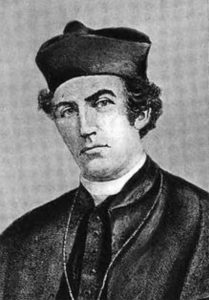 A solid suggestion for ‘PW’ which has emerged is that of Patrick Walsh, Bishop of Waterford and Lismore from 1551 until his death in 1587.

Now Bishop Patrick Walsh was in a very interesting position. The surname ‘Walsh’ is an Irish form of the surname ‘Welsh’. Bishop Walsh’s family background is not yet clear, but he did study in England at Brasnose College, Oxford.  Prior to the Reformation he would have definitely used a Catholic bishop’s seal. Although he was appointed as a bishop of the Church of England it seems Bishop Walsh played both sides. Besides his spiritual domination he and his family also seem to have had most of the commercial aspect of Waterford sewn up. (Indeed, when Sir Henry Sidney was appointed Lord Lieutenant to Ireland he was met with a procession in Waterford organised by Bishop Walsh.)

Now, if the Bishop was a closet Catholic he might have thought it discreet (and in his own best interests) not to use a seal reflecting the English Church; but at the same time – for the obvious son verse reason – it would not have been sensible to used a seal which reflected the Catholic Church either. Hence the suggestion that he was a candidate for using something in-between. Alternatively it is perfectly possible – given his business interests (for which he would needed to travel extensively on a route which took him along the South Wales coast to England) – that he used two seals, one for religious and one for secular purposes.

It is again unfortunate that Bishop Walsh’s dates are somewhat later than the National Museum’s estimate of the age of the Druidstone Ring.[/vc_column_text][/vc_column][/vc_row]